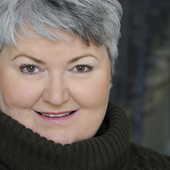 Christiane Iven, soprano, was extraordinarily successful as a concert singer and performer of Lieder, and no less at home on the operatic stage, where she stood out in particular through her well thought-through and unusual interpretations. Among other things, she was for many years a member of the ensemble of the Stuttgart State Opera. There, and in a number of German and European opera houses, she wowed audiences with roles such as the Feldmarschallin (Rosenkavalier), Agathe (Freischütz), Didon (Les Troyens), Marie (Wozzeck), Kundry (Parsifal), Strauss’s Ariadne (title role), Alice Ford (Falstaff), Elvira (Don Giovanni), Emilia Marty (Die Sache Makropulos), Sieglinde (Walküre) and Isolde (Tristan und Isolde). Christiane Iven is a very successful singing teacher. Since 2013 Christiane Iven has held a professorship at the University of Music and Performing Arts Munich.